advogato autocross automotive books drag eclipse electronics evo geek health internet laser meta other personal photography politics tehfunnay wrx
status updates
You all understand that The Handmaid's Tale was not supposed to be a documentary, right? Posted 9 days ago
Well, fuck. Posted 9 days ago
If I still worked at the bird factory, I'd be calling him Apartheid Space Karen in public, no need for a shitty dis… https://twitter.com/i/web/status/1537683336683892736 Posted 17 days ago
GeoURL ATOM RSS 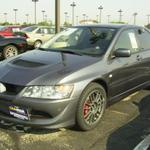 Over the weekend, after a lot of searching, we finally found a replacement for the Jeep and Laser that I've been using as (unreliable) daily drivers: a 2005 Graphite Gray Mitsubishi Lancer Evolution MR. Just over 31k miles on the odometer, and the only mods I can see are an AMS catback and a set of engine hood struts (there's also a bit of confusion about the clutch; while it's certainly not stiff by any stretch, it definitely feels heavier than a stock Evo clutch). It also has brand new "Nexen N3000" tires; no, I'd never heard of them either, but the tread pattern is fairly similar to some of Toyo's tires, and they're "ultra high performance summer tires", meaning they're going to be a handful this winter (but a lot of fun until then).

First impressions: this car is unbelievably fun. It's obviously almost as fast as the Laser (if not faster), but it doesn't feel like it's straining to do it. Turn-in is crisp, and there isn't a hint of chassis flex (in comparison to the other cars in the household). Braking is just amazing. This car is pure driver confidence, something you just wouldn't expect from a four-door grocery-getter. The six-speed really didn't take much to get used to, although the gears are noticably shorter; you're spending a lot more time shifting. The active center diff seems to be a fun toy; I'll see if it makes much of a difference this winter. :-) One huge item for me is available head and leg room; I actually fit perfectly in this car, with a ton of headroom for a helmet, and plenty of room (almost too much) for my legs, and the steering wheel drops right into reach.

To say I'm happy with it is an understatement. Now that I no longer have to spend my free time working on the other "daily drivers" when they break, maybe I'll actually make some progress on the Eclipse, and I'll even have something DSM-derived to take to the Shootout this year. Good stuff. :-)