advogato autocross automotive books drag eclipse electronics evo geek health internet laser meta other personal photography politics tehfunnay wrx
status updates
I can't be the only one who's noticed that tweet deletions are only being partially processed, right? Like,… https://twitter.com/i/web/status/1620125220580524032 Posted 7 days ago
It's crazy that it took Elon taking over for Twitter to finally return to it's roots of screwing over anyone who relies on the API Posted 24 days ago
May you live in exciting times, etc. https://twitter.com/ZoeSchiffer/status/1606408842417512455 Posted 45 days ago
GeoURL ATOM RSS

We finally got the Laser to the track, and were overwhelmed with the results. First, a quick rundown of the mods we've made since buying it: a rebuilt transmission with a taller first gear and double-synchro first and second from TRE, an ACT 2600 clutch, a Fidanza aluminum flywheel, Taboo billet clutch fork, a K&N FIPK for a non-turbo DSM adapted to fit ours, and my home-made boost controller set at about 15 psi. Really, most of the work was reliability-related (the drivetrain stuff), and only the air filter and boost controller really added power. So I was shocked to see a best run of 14.102 seconds at 95.31 mph: only about a tenth of a second slower than our Eclipse, which has had far more (admittedly, preparatory) work put into it. In the course of the evening, the driveshaft thumping became pretty obvious, and the car practically sat down at launch because of the poor shocks. My first couple of launches also resulted in a ton of wheel hop, which means the motor mounts could use replacement soon. But despite all that, we're pretty happy with how fast the car is running with just these few modifications.

Quick picture that showed up on the track's website; that's me in the bright yellow shirt, Erica in the jeans in the front of the picture, and a friend of mine (Justin Champlin, who was there with his RSX-S) standing beside me): 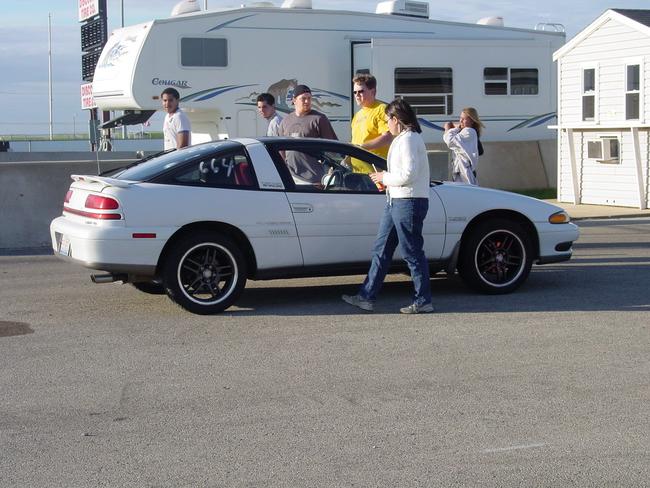